Stepping Up The Game 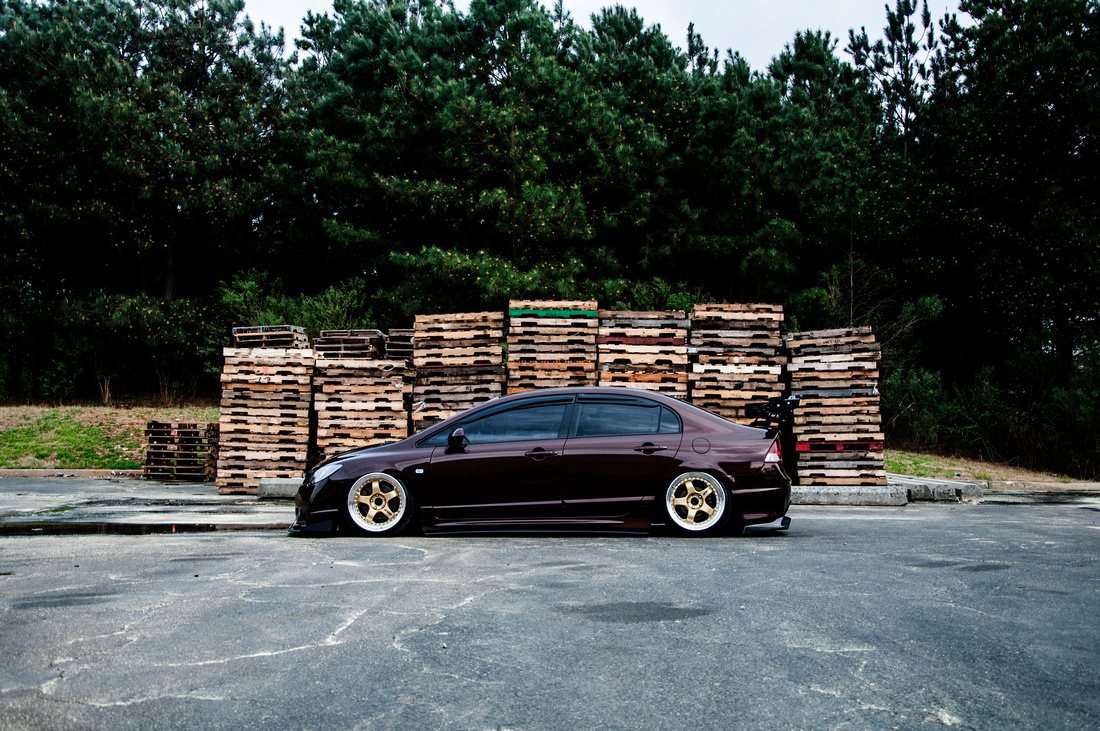 Lanorris Wilson approached me over Instagram about a month or so before Import Alliance. We stayed in touch discussing the possibility of a shoot for his 2008 Civic Si Sedan and whether or not I would be able to make it down to Atlanta. Once things fell into place, I let him know immediately that I would be attending. I've never been more flattered to meet someone than Wilson. After wandering around the show, lost like a kid in a giant toy store, I found his Root Beer colored car. He was on the phone and when he saw me he quickly told them: "Paige is here! I gotta go!" Meeting him made me feel like I had a real fan, he was excited and grinning from ear to ear. His excitement was contagious and I couldn't stop smiling. 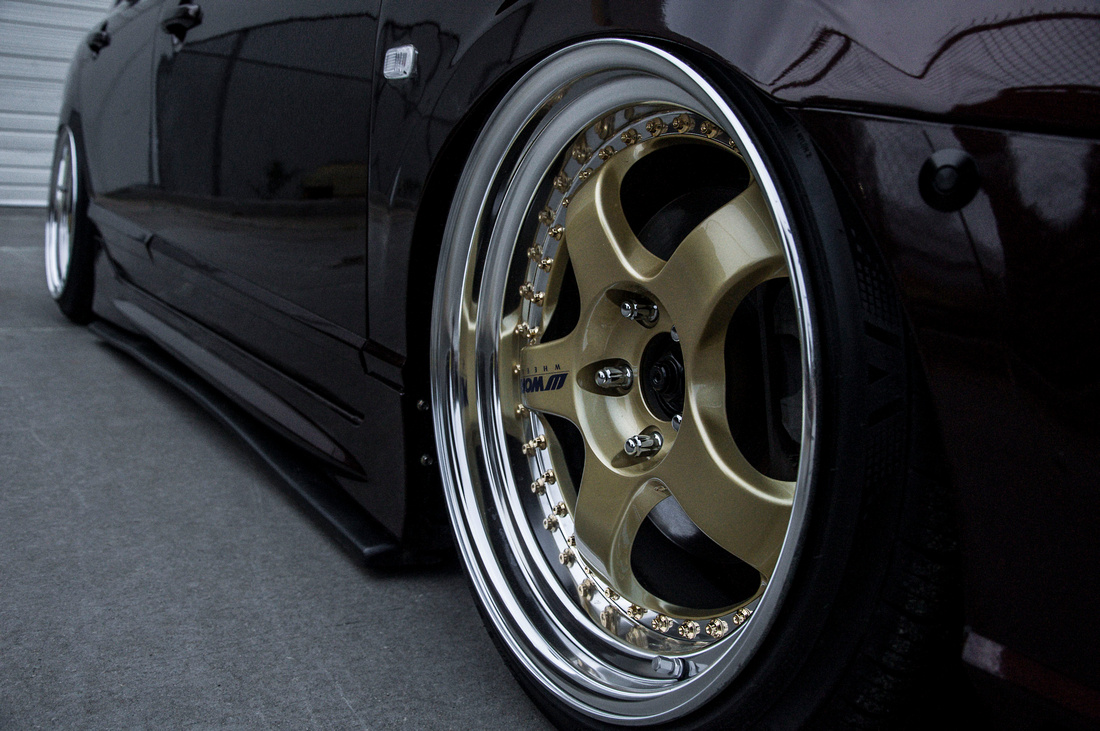 Wilson purchased the Si, which now has the Mugen RR/FD2 Conversion, about two years ago. "I have been wanting this car since I was 12 years old. I remember seeing my dream car back in Shreveport, LA at this place I use to hang out at every Friday night called Clyde Fant Parkway. The first one I saw was orange and it sounded so aggressive. The guy that drove it was kind enough to let me sit in it and actually took me for a test drive. That day I knew when I was able to afford it, that would be the car I would end up getting. And now I own it!" 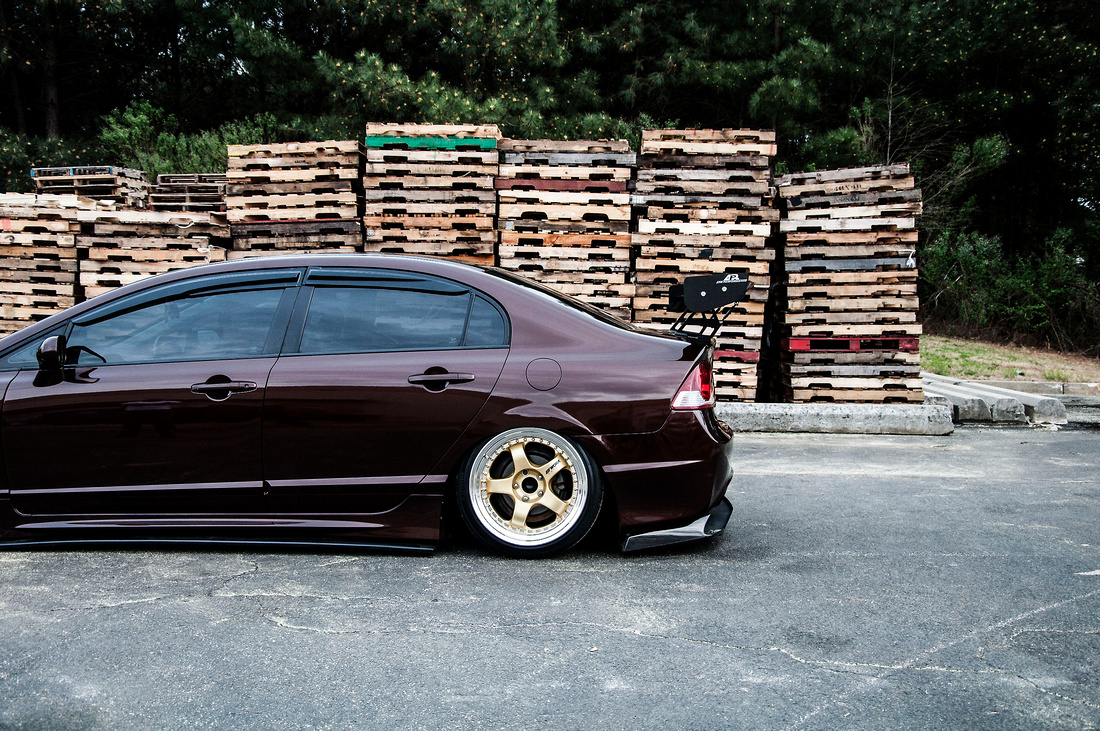 On top of being the most positive person I was to meet at the show, he was one of the most humble. Wilson talked about his car with such passion and attention. At one point, we were talking and we turned to look over at a group of six or more people crowded around his car all taking photos. "That's just amazing!" I could tell he was genuinely excited about the attention his build was getting but all the while he still seemed reserved and humble about it. 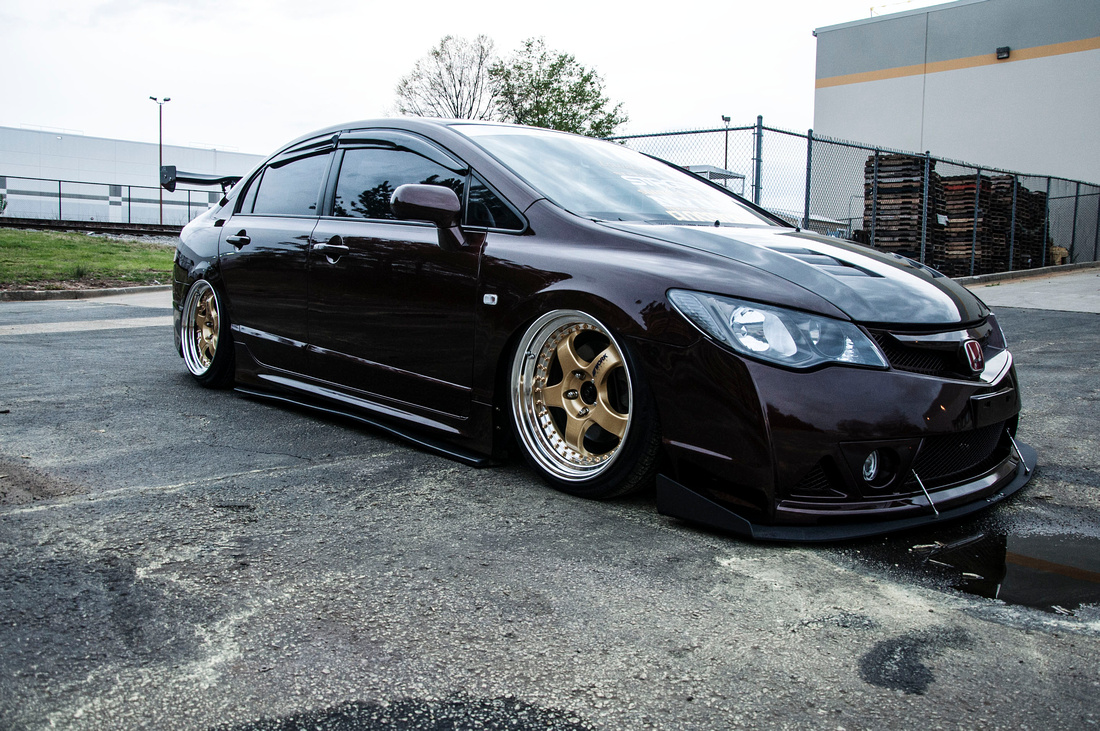 While still in Shreveport, LA, Wilson was introduced to the car game by Kenny, Sunny (AKA: Shade Tree), and Demetrius. "They were like the main squad that everybody wanted to be with and also just to be around because of their sick and beautiful builds. Kenny owns a turbo B20 EJ1, Sunny owns a turbo H23 Honda Prelude, and Demetrius owns an RSX Type S. These were some humble and chilled guys that never bragged about their builds and weren't in it for the fame. They were in it just for themselves. They did have a little competition between them though, on who could build the faster car. Ever since I started hanging around them, my love for cars got bigger, and bigger, and bigger! My car is where it is now because of them." 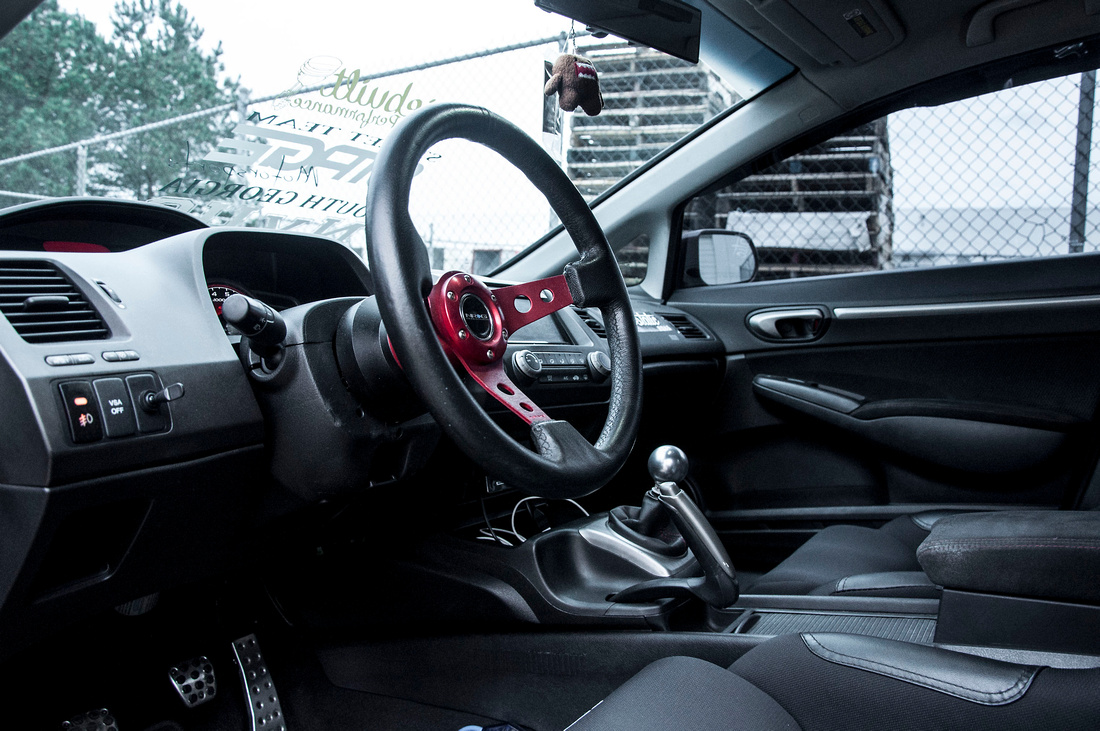 It comes to no surprise that Wilson is sponsored by several companies such as: Stage Motorsports, LouieBuilt Performance, and Inspire USA. "All of these companies and shops have played a major role in my build. Inspire USA was the first to show interest in the mod list I proposed to them and they believed that I would accomplish my goals. Collin, my now friend, has put up with me and all my questions and prices, etc. He was always so cool every time I would call him. He seemed happy to talk to me and so happy to be apart of my build. I have been with them for about a year and a half. Every time I need something from their company, they're always more than happy to take care of me. 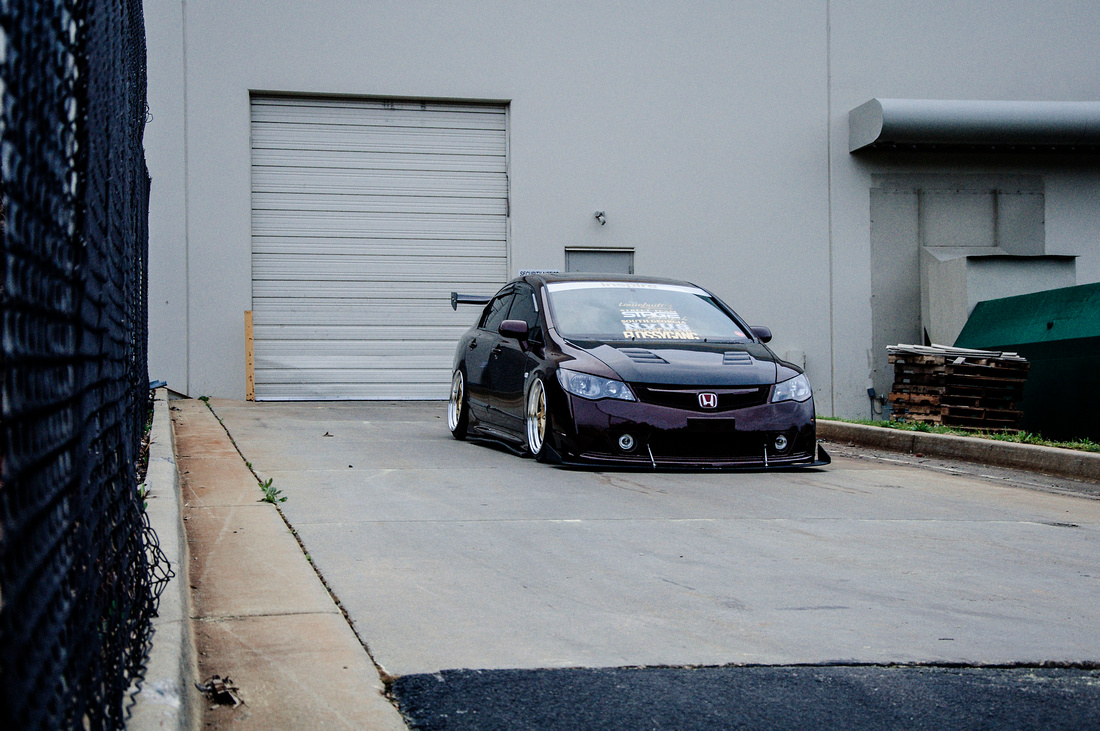 "Stage Motorsports is owned by my boy/brother from another mother, Tristian Church. I don’t even know where to start with this man. He is there every time and any time I need something. Even if it was 1AM, he would wake up to answer my questions, put in an order, or even if I needed someone to talk to. He has done so much for me especially when it comes to orders, great customer service, being a great friend, and fast shipping to me when I was on a deadline for a show that I had coming up. Even if the company said the item I needed was on back order, he would call every single company that he has a partnership thru to get the part shipped and in hand as soon as possible. I can’t thank that man enough from all he has done. " 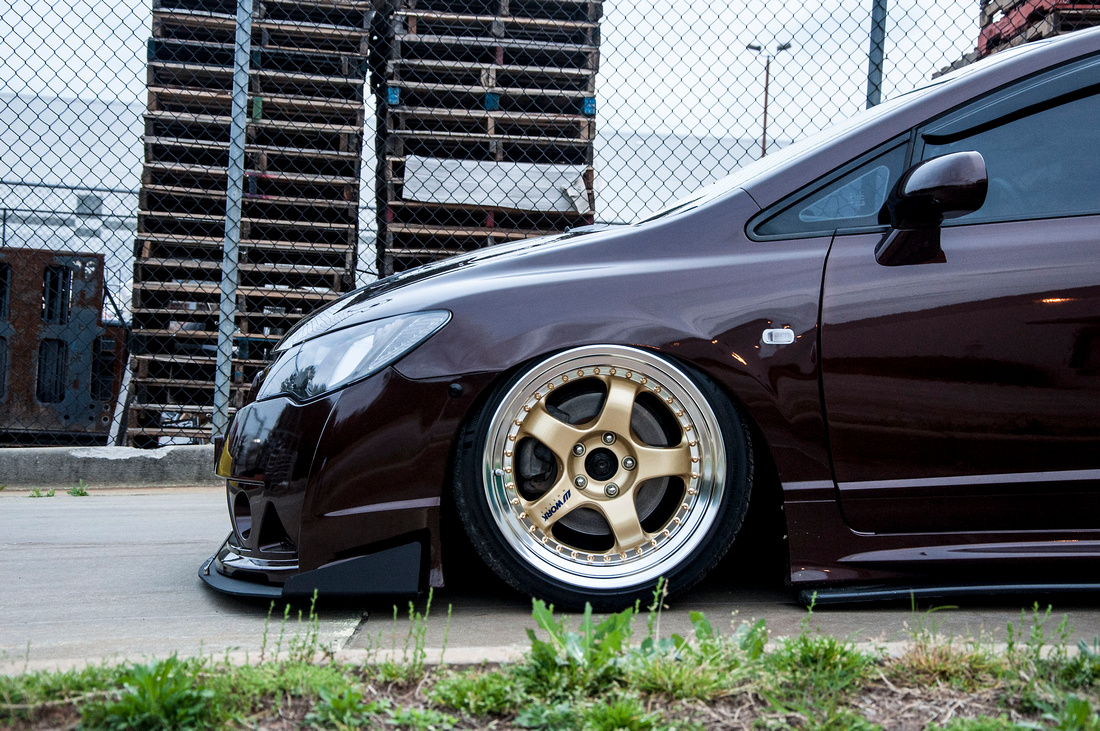 LouieBuilt Performance is owned by Wilson's friend Louis Puryear. "This is where most of the action goes down. We will be putting some serious work in the build very very soon. He is also one of the brothers that have also put up with me and all my questions and etc. I just wanted him to know that he has played an important role in this build and will continue playing that role." 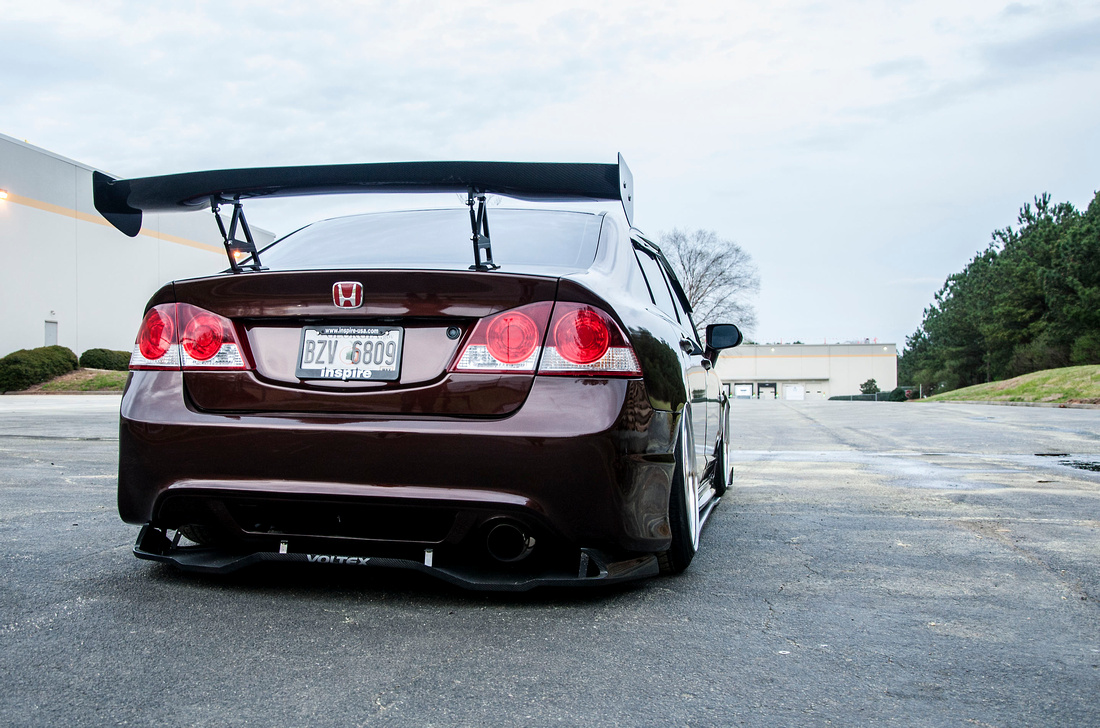 Wilson has big plans in store for his future modifications, such as adding: a Kraftwerks supercharger, upgrade the clutch, flywheel, and motor mounts, AEM gauges, and J's Racing front bumper with carbon fiber canards and front lip.  He has remained thankful and grateful to all of those who have helped and supported him through this process. It's refreshing to see how much someone has accomplished, and intends to accomplish, and remains so humble. 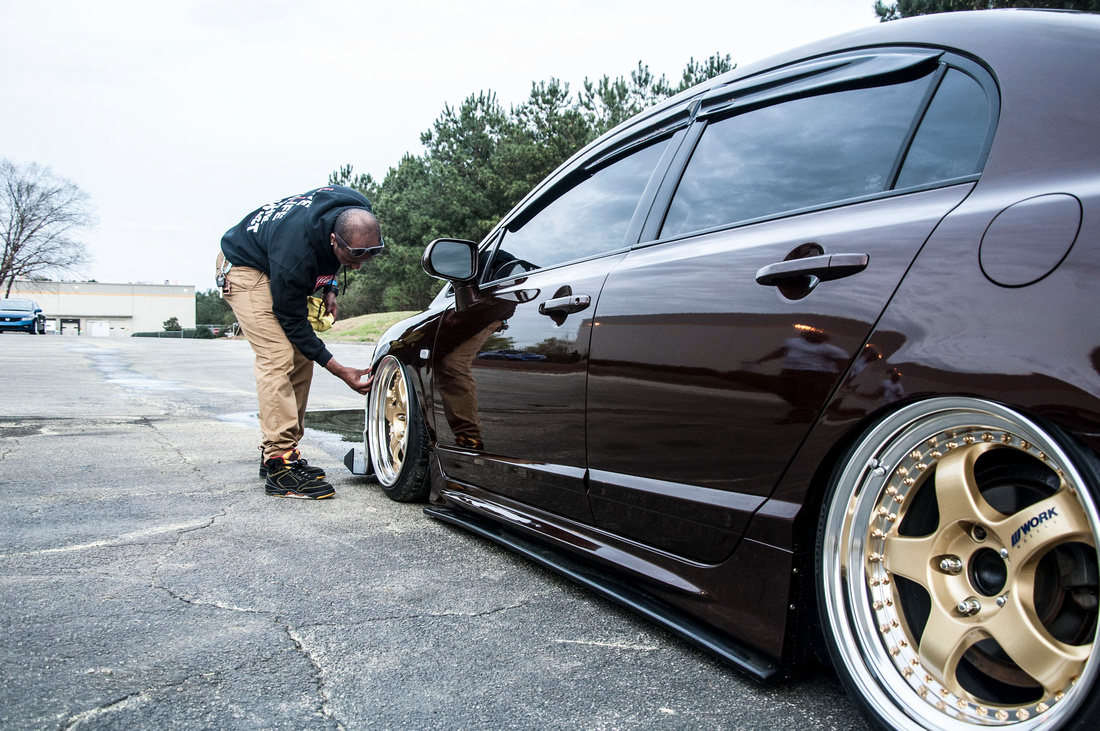 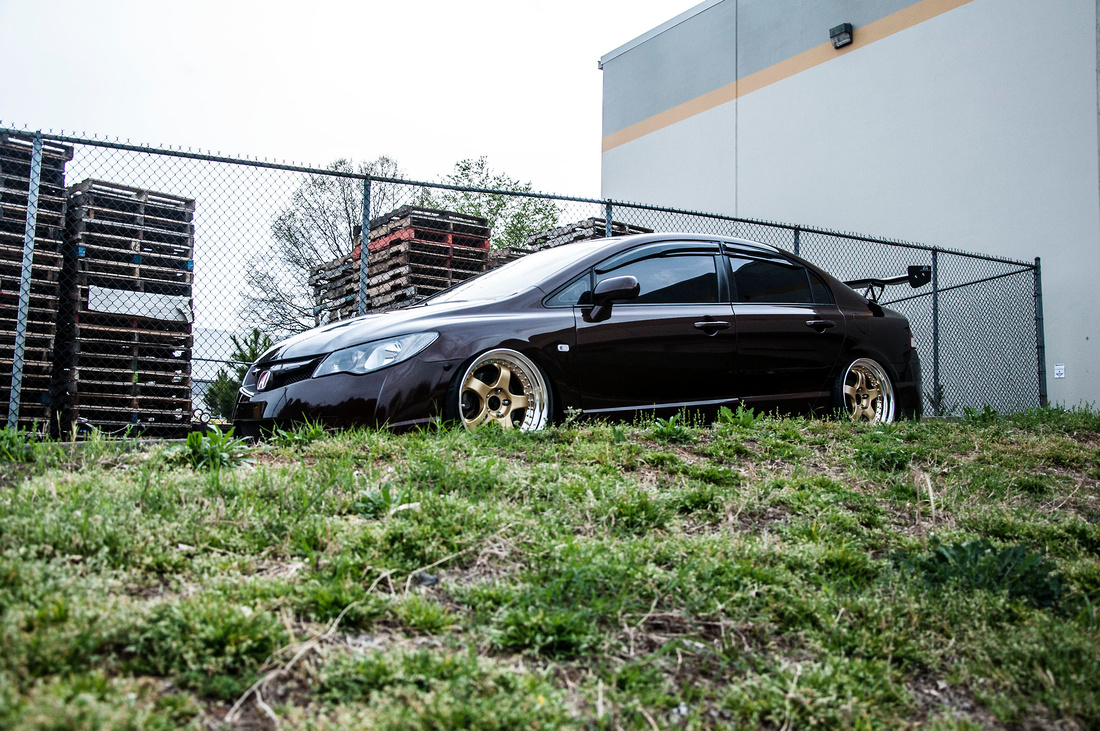 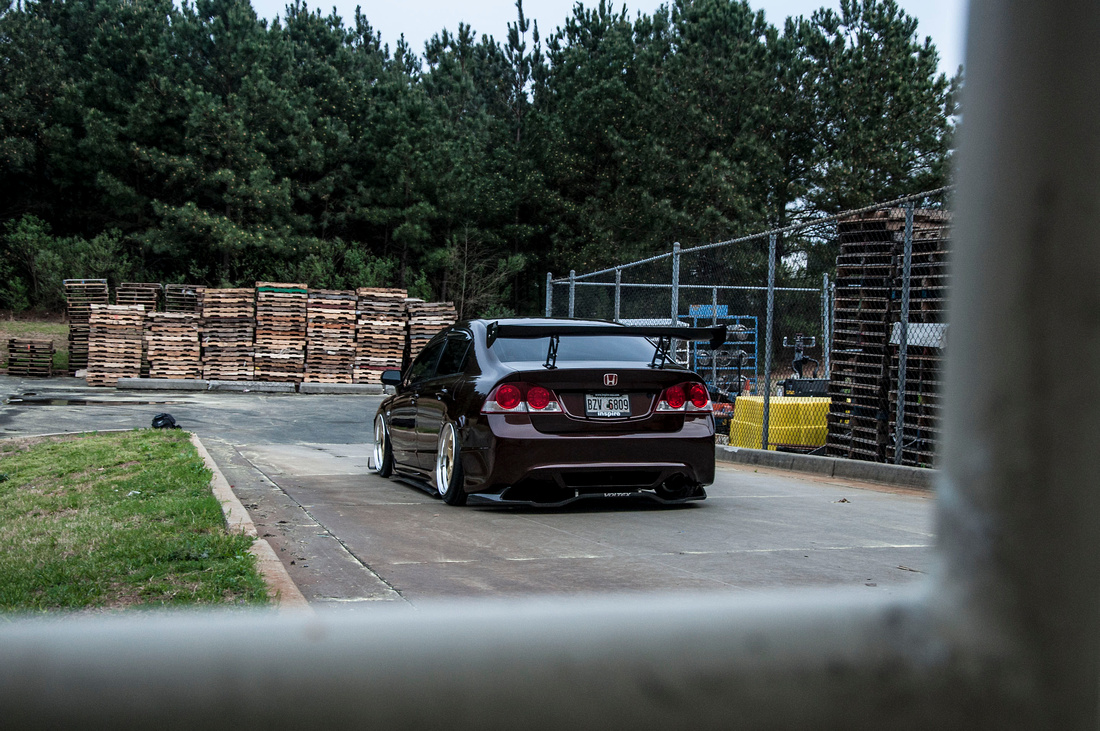 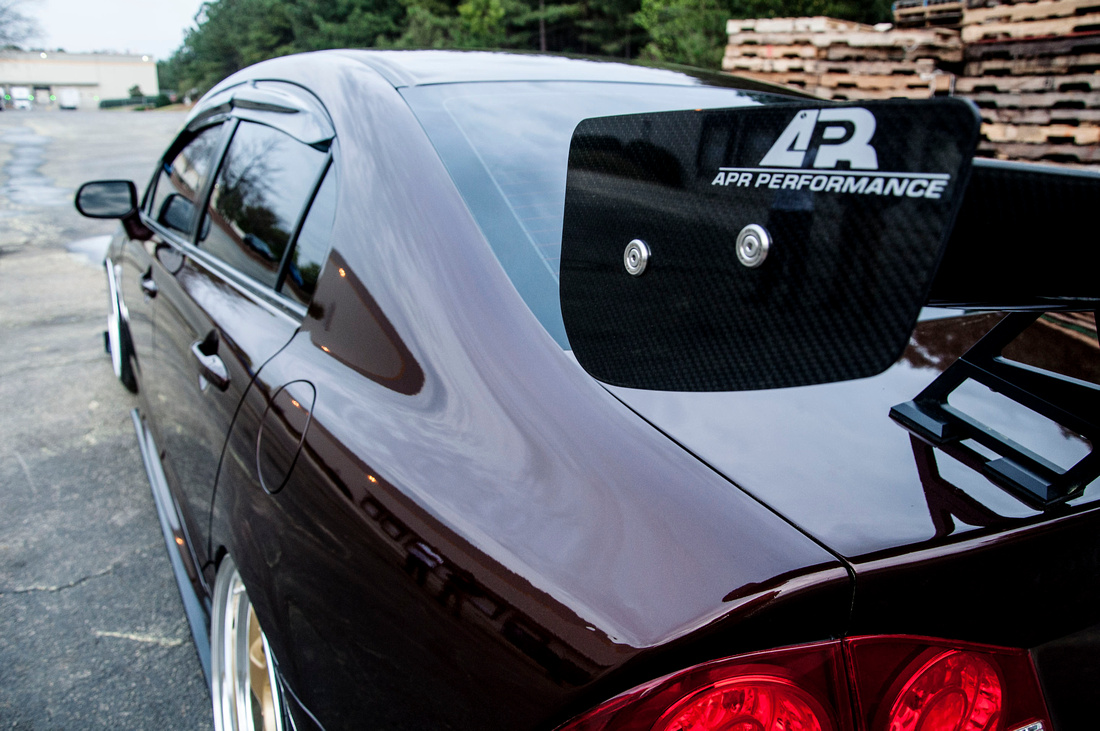 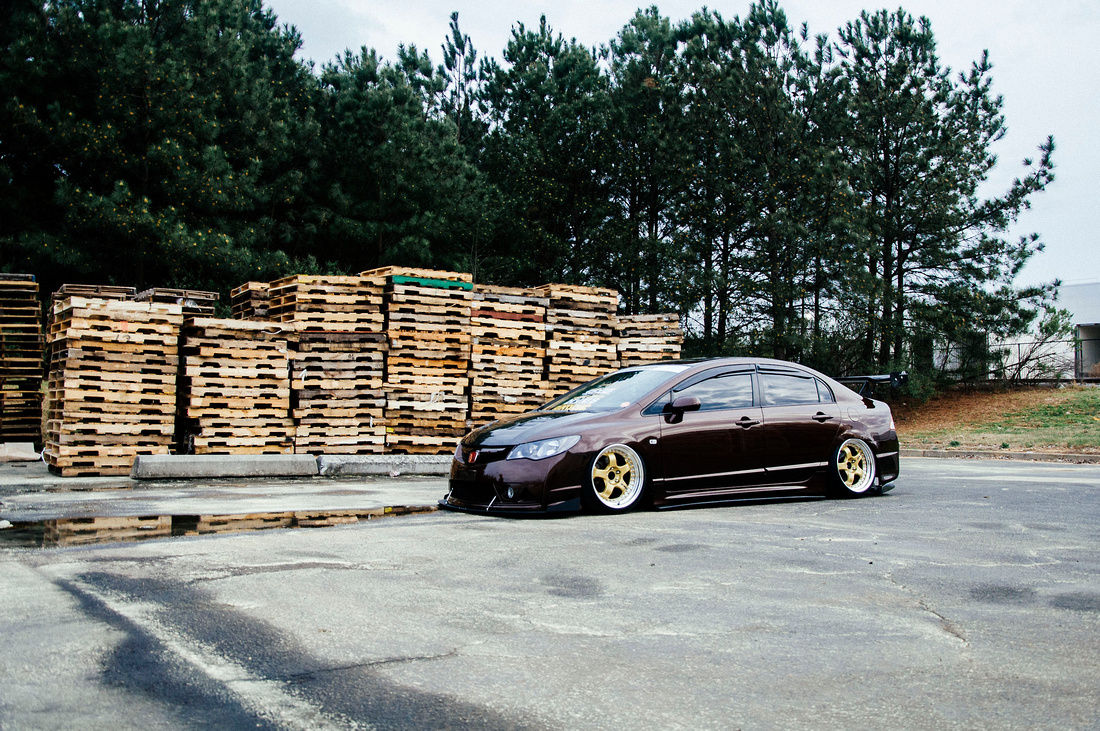 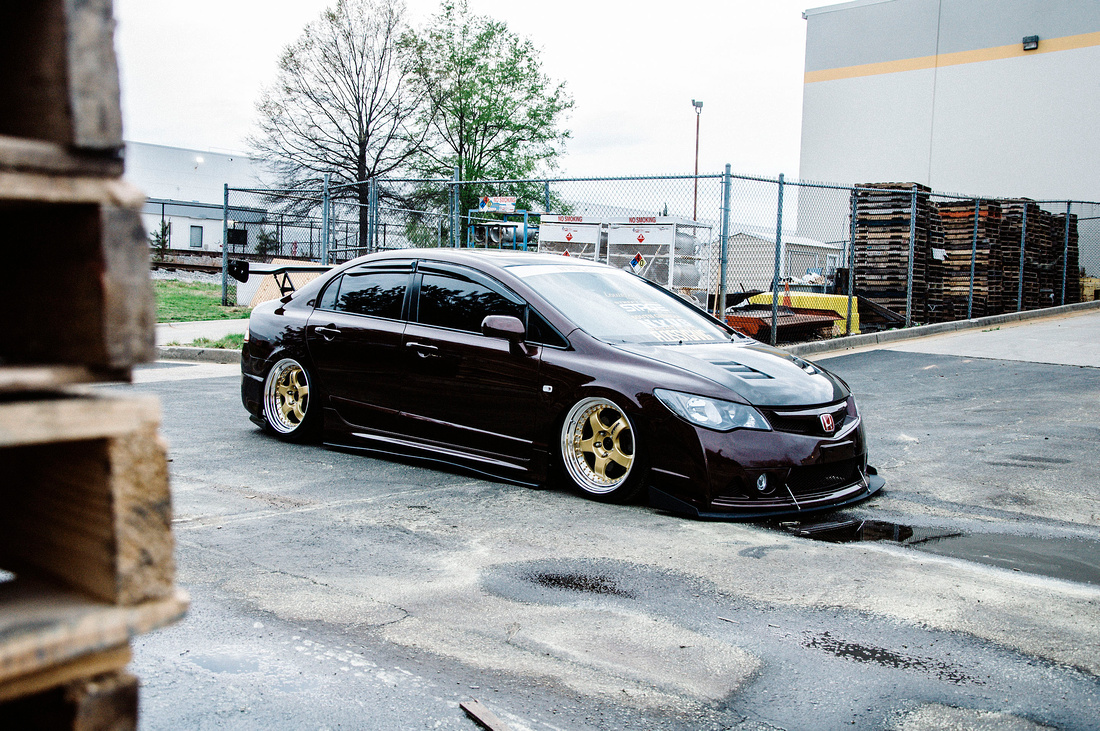