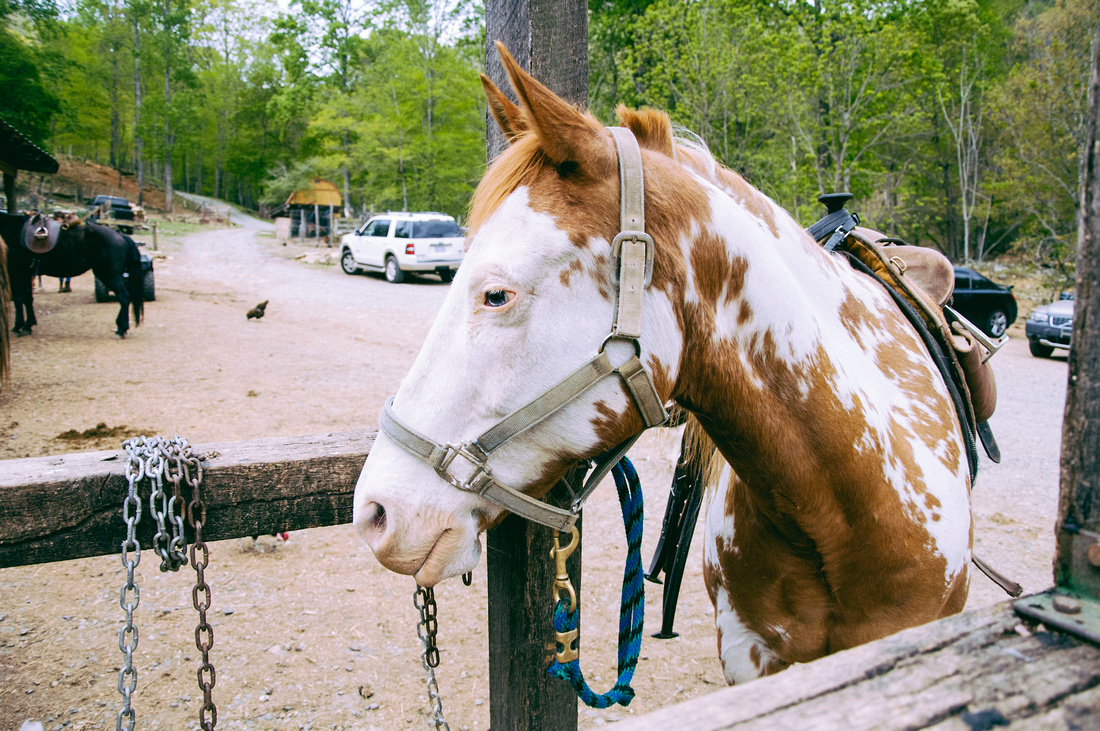 About an hour outside of Asheville, NC was a cabin on a little farm, that my boyfriend and I visited with two other couples. Kyle and Ashley had invited us, and Carrie and Bryce, up to stay for Ashley's birthday. The drive up to the cabin could have been considered a treacherous event. It was raining and there were no lights at the top of the mountain as we drove over rocks and what I would call mini boulders. Once we were all settled into the cabin together we fired up the hot tub, cracked open the beer and liquor, and ensued in what was to be a very long night. 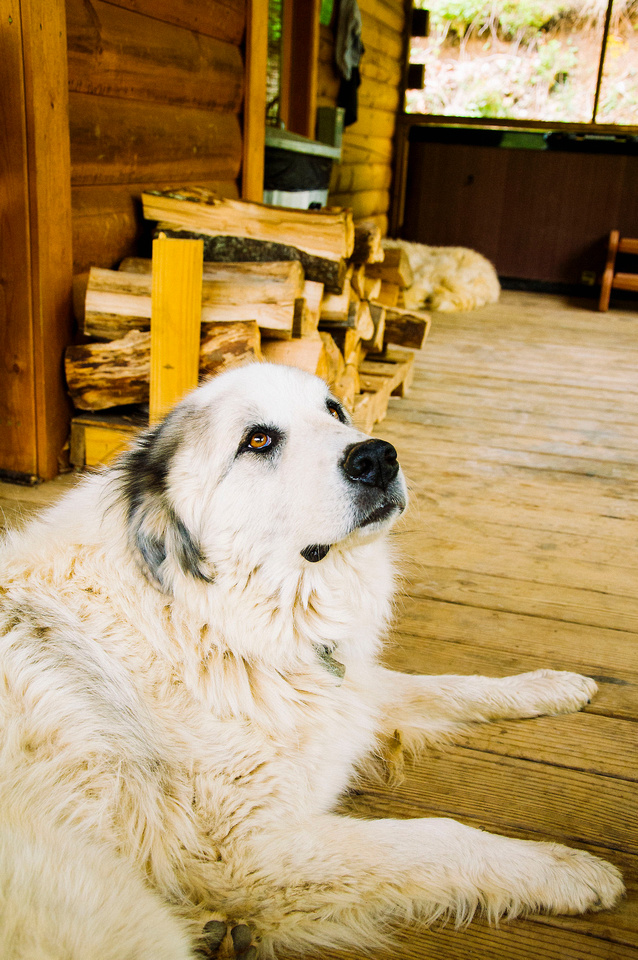 The next morning Kyle made breakfast as the rest of us stumbled out of bed. The farm was not only the home of horses, cows, goats, and a mass load of chickens, but several Gran Pyrenees. We tried to collect as many as we could on our front porch to spoil with love and affection before heading to the barn for a horse back ride. I was anxious to get back on a horse, and excited just the same. 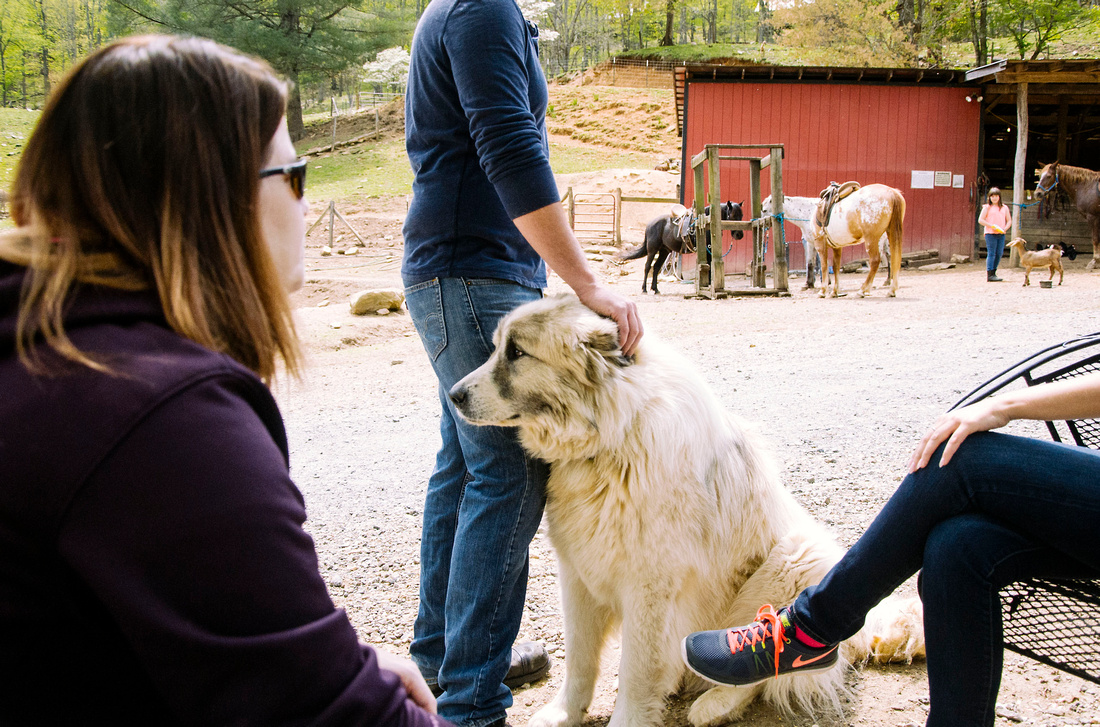 Sean and Ashley had never ridden before so I was excited to see how they would take to it. Most importantly I wanted to know what Sean thought because I've been dying to take a trip together where we can ride on the beach or a deep mountain trail. 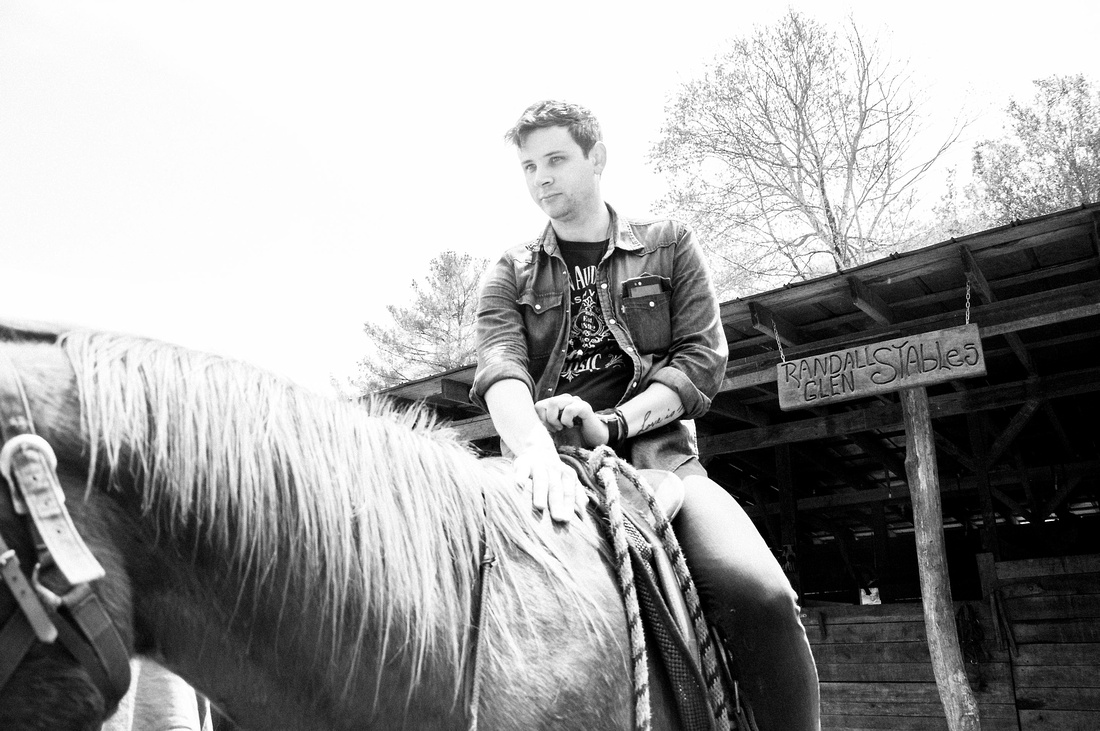 The trail ride we were promised was not an actual trail. We walked casually down gravel and poorly paved roads of the neighborhood. I wasn't pleased with the roads but it was a beautiful day so I didn't complain. The trail horses, were in fact, not very disciplined into being trail horses. My sorrel gelding had to be in second and threw back his ears and back leg when someone got to close to his rear. The other horses were all too eager to get in front so there was a lot of resistance from the herd. At last, we reached the half way point to turn around and head back to the farm. 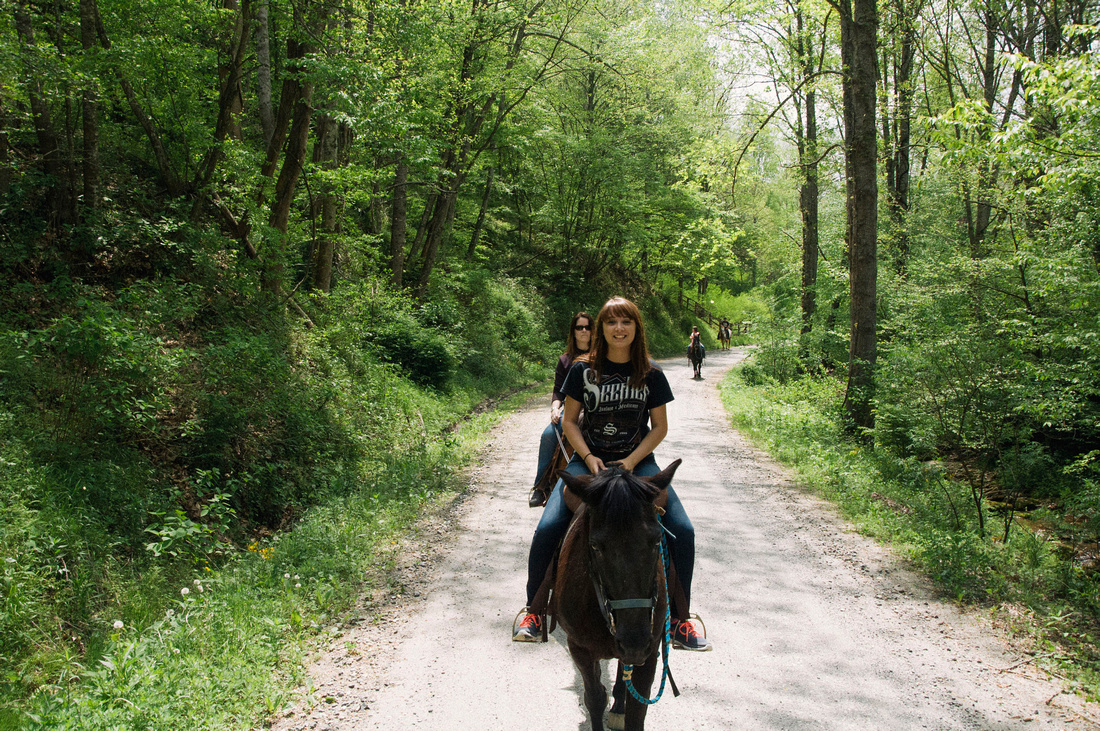 Most of the herd wandered into the field to graze. I refused to let my gelding graze and was busy keeping his head up and turning him in circles whenever he tried to bunch up to lurch into the field when I heard the sound of thundering hooves. I turned around to see the reins of Kyle's Hidalgo paint wrapped up the back leg of Bryce's chestnut gelding. Both were running and the chestnut started to kick to free himself. Kyle came off of the paint just has his bridle was ripped off of his horse. Bryce was next to fall. I first I didn't think it was that bad, but when Kyle didn't get back up as quickly I knew something was wrong. 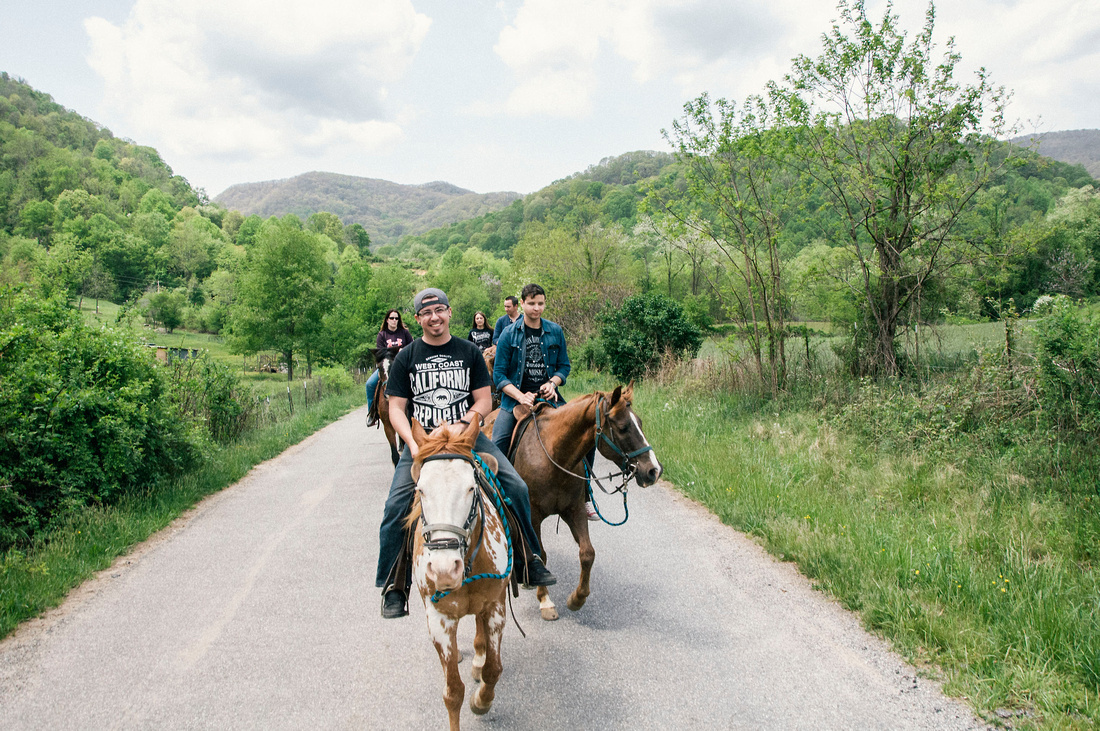 The ride back couldn't have been more difficult. Kyle was on repeat from suffering a severe concussion and the rest of the horses seemed to have had enough riding for the day. I remember being scared myself of falling whenever my horse tried to rear but fed up enough that I wasn't going to be thrown off myself. Our guides' horses wanted nothing more than to bolt back to the barn and a few times they turned them lose to get it out of their system. Bryce and I dismounted and walked the rest of the way back. In response, the horses let out a heavy sigh and any tension they had was gone. 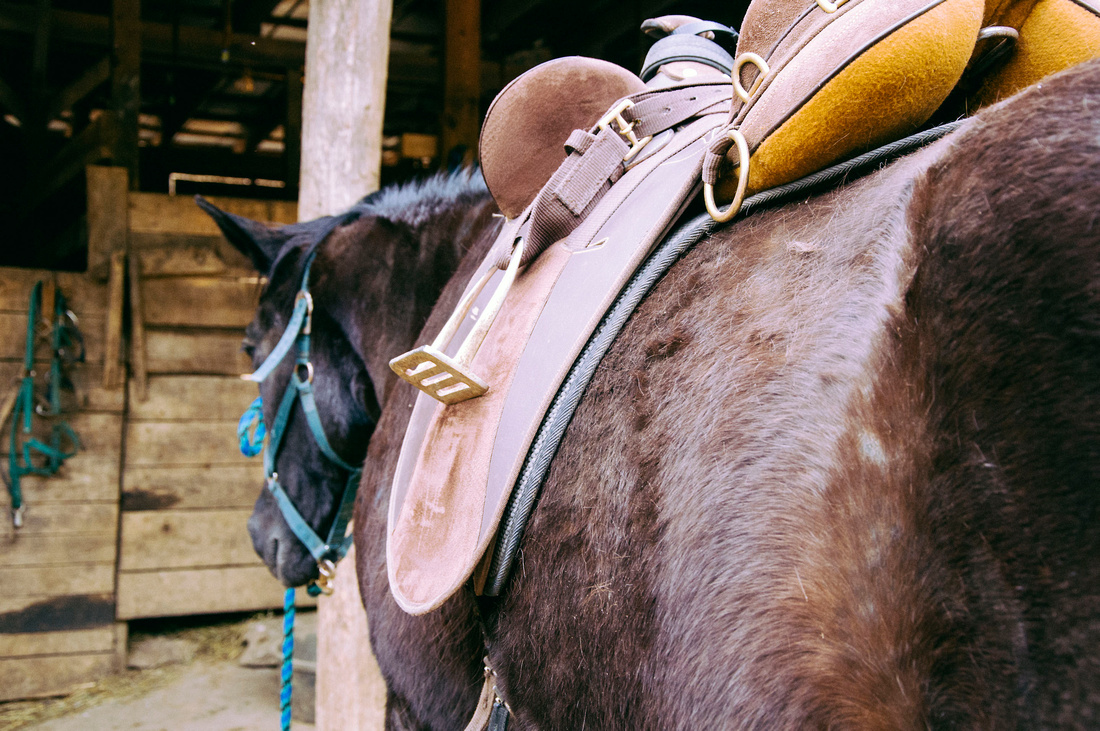 Kyle was taken to the emergency room where he was to stay over night after the doctor's found blood on his brain.  Ashley stayed with him while the rest of us tried to figure out what to do or what we could do. What Ashley didn't know is that we weren't just there for a birthday celebration. We had all driven up because Kyle intended to propose to her at the top of Chimney Rock at the end of the trip. 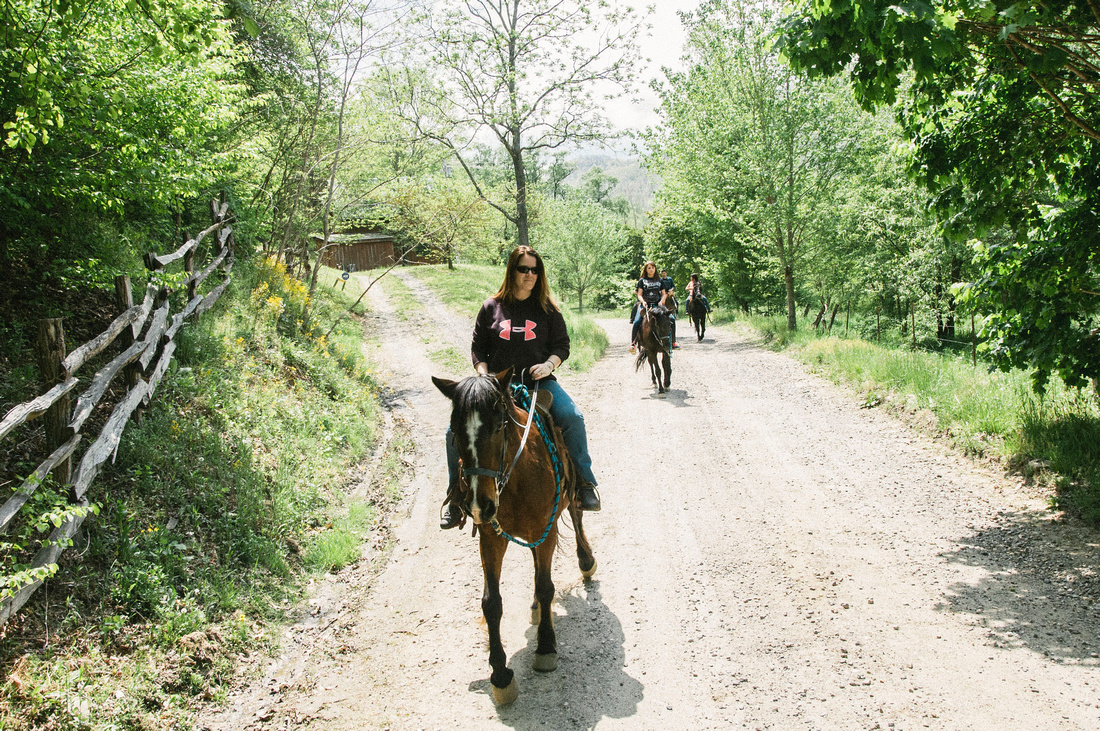 The next day he was released and despite what some of us thought he intended to go through with his plan. His parents had arrived the night before when they heard of his fall and Ashley's were already up at Chimney Rock waiting for us. The skies were heavily clouded but as we got closer and closer it held off. The elevator to the top was out of order so we would be taking the stairs.... And that's when it started to rain. I remember laughing under my breath that this was the craziest thing. Kyle was just released from the hospital from falling off of a horse and now here he was, in the lead with Ashley at his side rushing to the top. 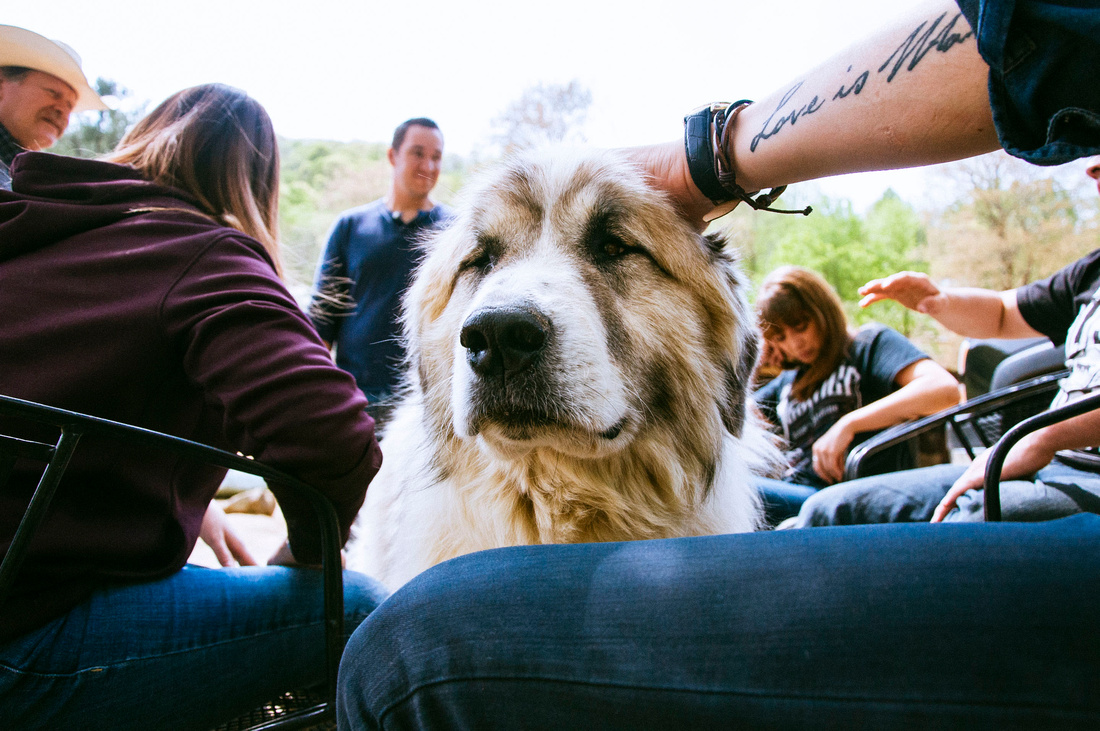 It was pouring down rain as we made it to the top until every last one of us made it. I kid you not, as soon as our group and both sets of parents (because Ashley still didn't know her parents were there) made it to the top it stopped raining. The clouds parted and there, in the center was a giant rainbow. I couldn't believe it but mused to myself that God has got a sense of humor and the best intentions. 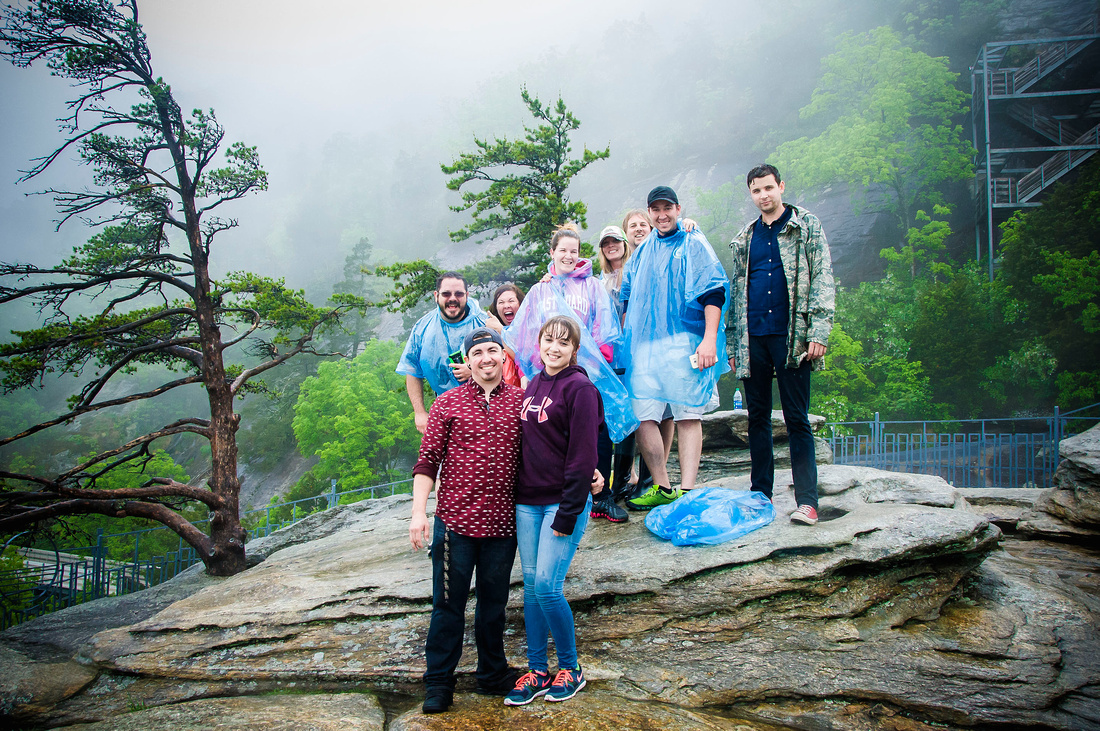 I snapped a group photo of everyone, still without Ashley knowing what was happening. I positioned them to the side for "individual" shots and that's when Kyle proposed to her. She said yes, the biggest smile stretching across her face. There was an immediate glow about them and it was one of the most beautiful things. 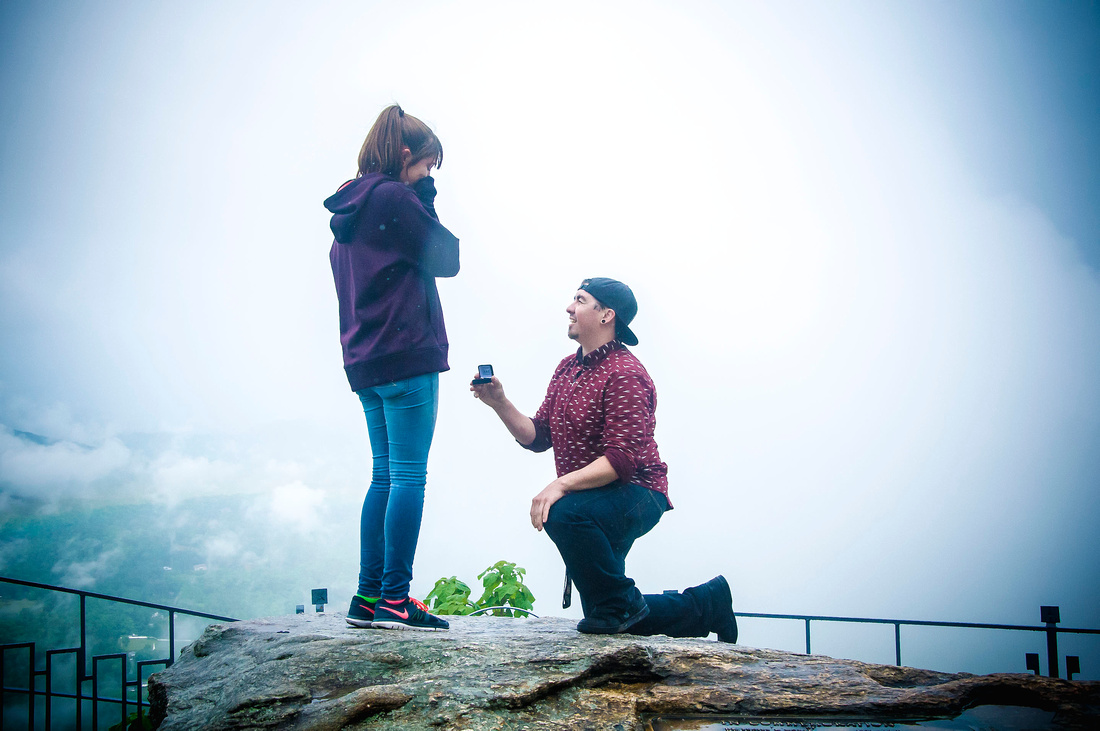 On the way home Sean said something, and I'll paraphrase because I can't remember it word for word: "Maybe that's God's way of telling him if he wants to be with her, he's going to have to fight for her. Maybe that's how their relationship will be and they'll always have to fight for what they want but in the end it's going to be rewarding and beautiful." 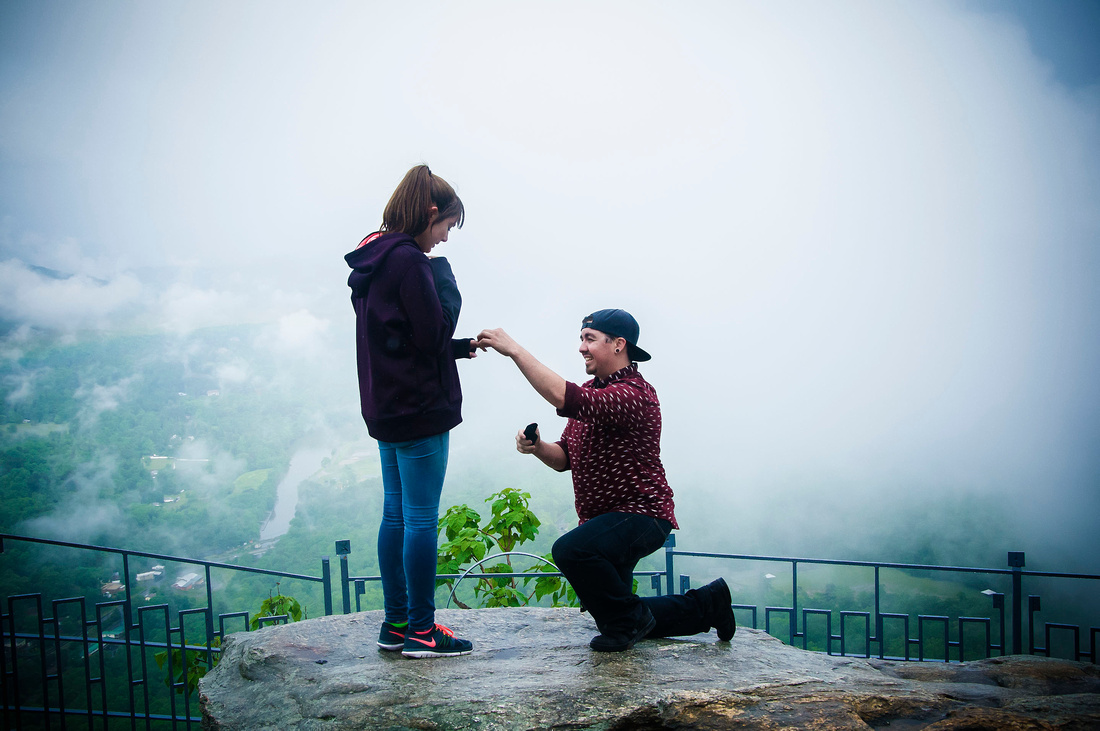 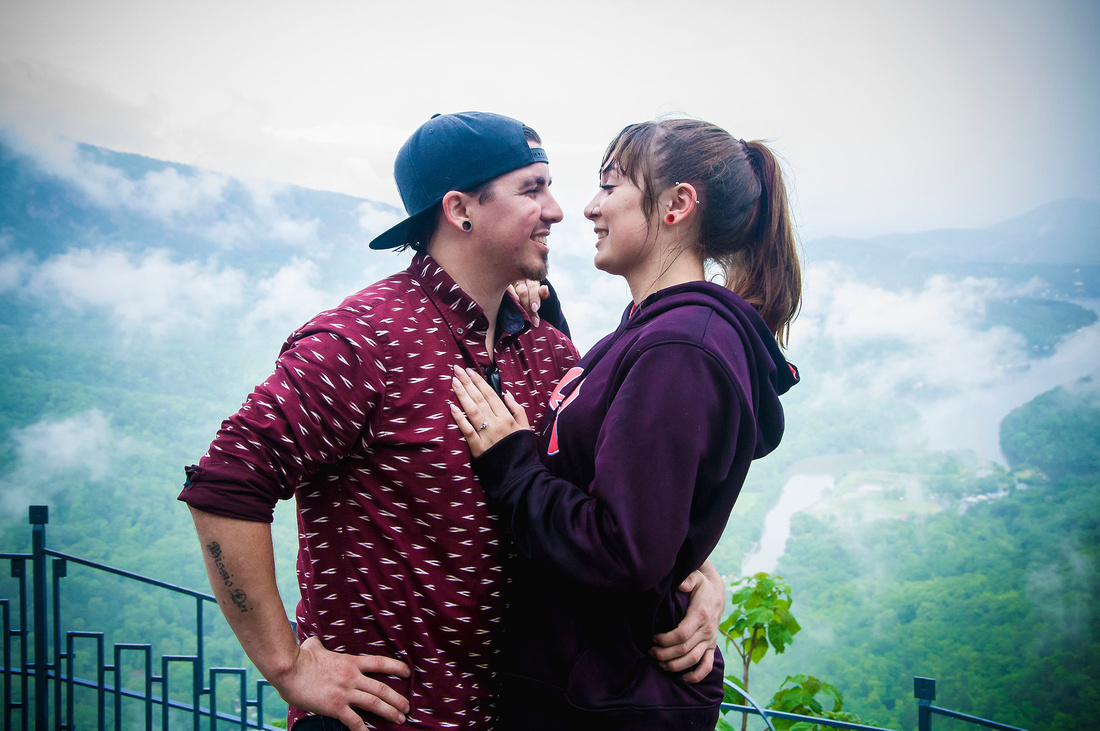 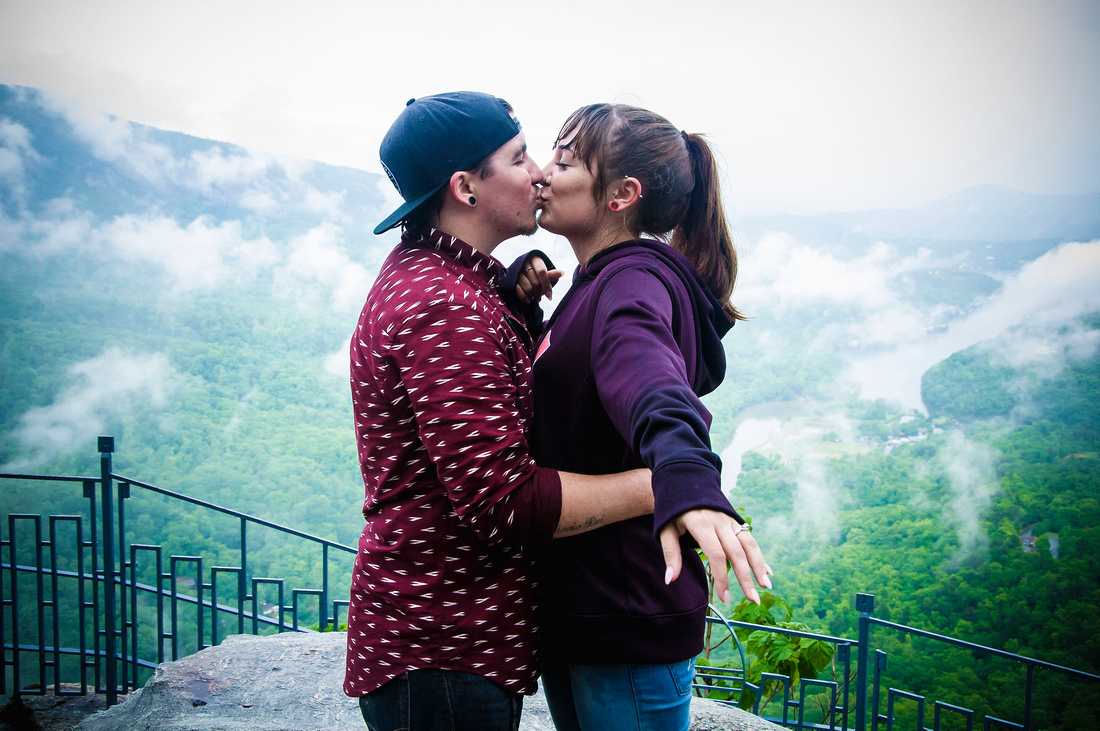 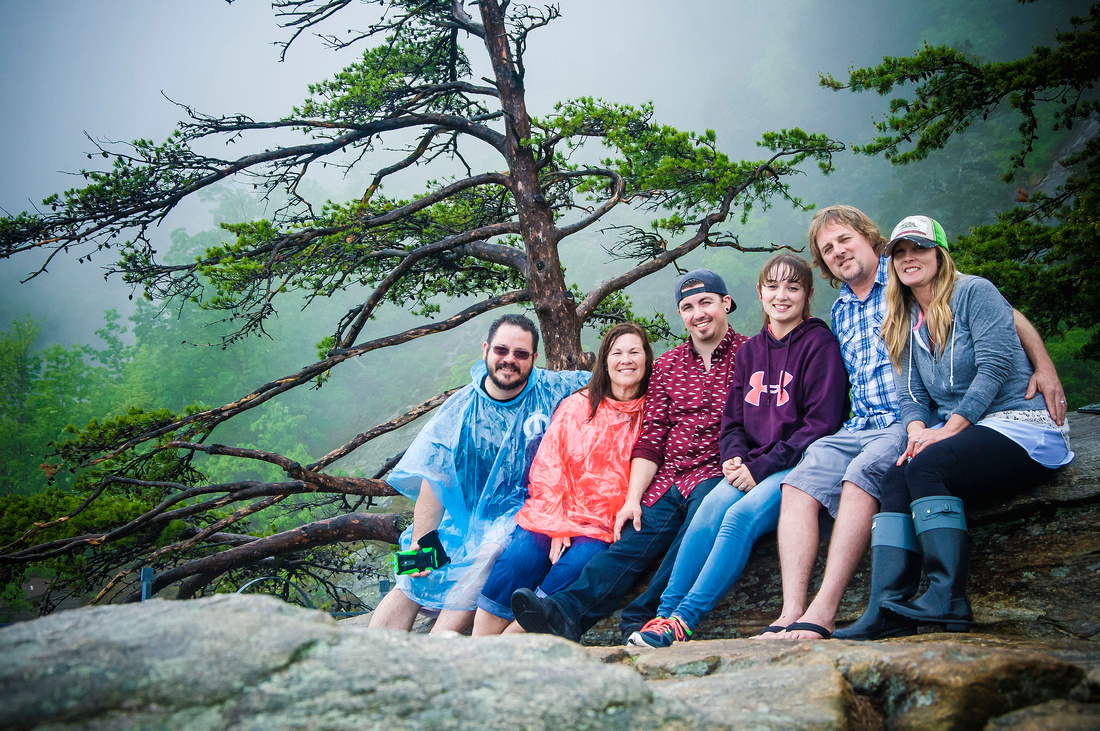 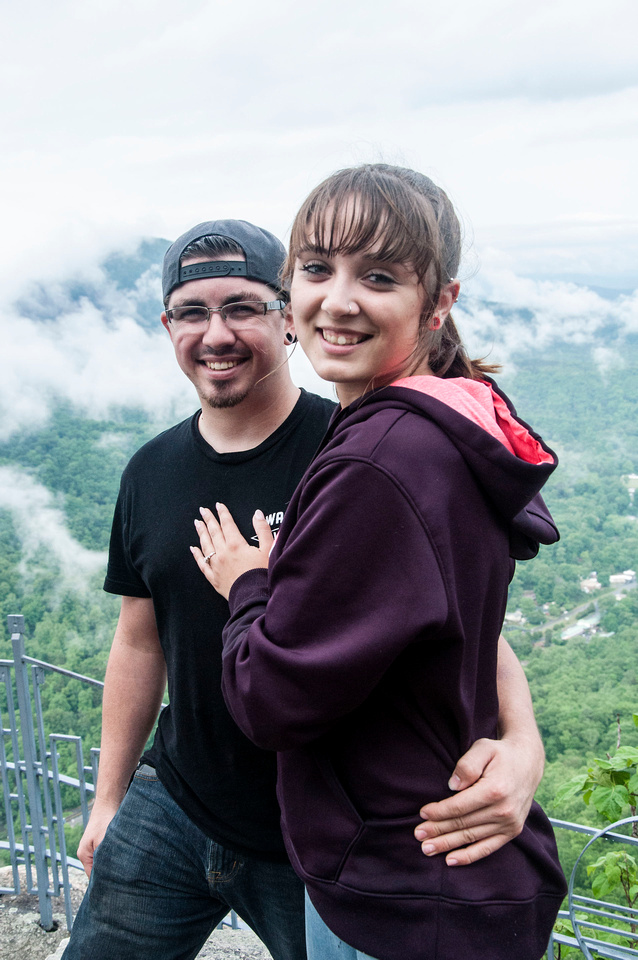